VARGO® and COFE® are mentioned in a stock analysis report about American Eagle Outfitters prepared by Trefis. The report discusses the growth of AEO’s direct-to-consumer business and how COFE® helped performance at the AEO omnichannel facility in Pennsylvania during the 2015 peak online holiday shopping season. Read the full article below:

What Is American Eagle Doing To Bolster Its Direct Business?

With growing internet penetration, a consistent customer shift from store to web shopping, and the proliferation of smartphones and tablets, American Eagle Outfitters‘ (NYSE:AEO) direct-to-consumer business has grown rapidly. From $307 million in 2008, the retailer’s direct revenues increased to $630 million in 2015, according to Trefis estimates. The US apparel industry is gradually shifting towards omni-channel retailing, which refers to providing a seamless shopping experience across stores and the online channel. This is becoming an inevitable move for US apparel retailers, including American Eagle, which is working hard to develop its omni-channel platform and has shown significant progress so far.

Online retail sales in the U.S. have grown at a rapid pace over the past several years, thanks to a growing internet usage in the country. Internet penetration in the U.S. has gone up from 44% in 2000 to 88.5% currently. Furthermore, facilitated by the convenience of constant access, 92% of teens today go online daily, including 24% who are online constantly, according to a study conducted by Pew Research Center. Over half of the teens (aged 13 to 17 years) go online several times a day, aided by the presence of smartphones, which is available to nearly three-quarters of teens. The smartphone usage will only increase in the future, and this will likely result in a steady rise in online sales. This is evidenced by research which predicts online apparel sales in the US to increase its revenue from $63 billion in 2015 to $100 billion by 2019. This segment is considered as the most popular e-commerce category in the US, accounting for 17.2% of total e-retail sales in 2015.

As is the case with other apparel retailers, AEO is gradually shrinking its store count, and focusing more on the high margin e-commerce channel. A soft and gradual reduction in its brick-and-mortar footprint, as opposed to a large closure in one go, is a good decision as it would not result in a steep fall in its sales. The company’s digital sales registered a 20% growth in FY 2015. This lends credence to its decision to develop its omni-channel presence by investing in digital marketing, and improve its website and mobile app. During FY 2015, the company invested $29.1 million in developing its e-commerce capabilities, and is expected to spend more in FY 2016. The direct business continues to perform well for the company, contributing to 30% of the company’s revenues in Q1 2016 and has been a major driver in its sales growth, especially since the mall traffic has been soft. 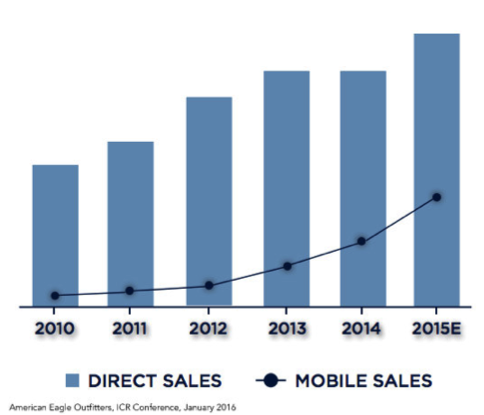 To aid the company’s growing e-commerce business, AEO’s distribution center in Hazleton, PA, went live last year as an all-waveless omnichannel fulfillment center. Although the facility has the capacity to service all the stores in the chain, it primarily services 416 stores. The center also fills all direct-to-consumer (DTC) e-commerce orders for the eastern half of the United States. This facility has enabled the company to reap numerous benefits, including improved operational efficiency, faster turnaround of orders, and lower manpower requirement. Furthermore, using Vargo’s Continuous Fulfillment Engine (COFE) warehouse execution system, AEO was able to achieve zero backlog on Cyber Monday in 2015. Moreover, during the first nine days of the peak holiday season, the company was able to divert 220,000 units of inventory, meant for retail, to DTC, based on a shift in demand. This represented ~15% of the 1.5 million DTC orders. The distribution center shipped 48 million units in 2015, while operating for six months. This year Christine Miller, American Eagle’s director of operations, expects it to ship 73 million units.

American Eagle has also focused on its digital efforts, and in this regard, the company launched its first responsive mobile web app, designed from a mobile-first perspective, earlier this year. In the fall of 2015, the apparel retailer launched its first “wholly owned” international website, as a part of its UK expansion. Subsequently, the company launched one in North America, according to Lance Wills, VP Digital Technology at American Eagle. The company is highly focused on developing its omni-channel tools, as it enables a more efficient use of the inventory, as well as delivering stronger customer engagement and support. AEO is also launching ‘reserve-try-buy,’ which enables pre-shopping. With this program, the customers can use the company’s app to reserve an item before trying it on in a store. The company’s online business, particularly through the mobile channel, has been quite strong. During the second quarter of 2016, the new Mobile-First website drove a 35% increase in mobile conversion. Wills also stated that Mobile-First plays a crucial role in driving international expansion.